The Benevolent and Protective Order of the Elks (BPOE) is one of the largest charity-focused fraternal organizations in the United States. The organization seeks to serve local communities through use of benevolent programs. Some of the projects undertaken by BPOE are arranging college scholarships to graduating high school seniors and drug-awareness programs for school age children, as well as various programs for veterans and children.

The Springfield Elks beautiful banquet facility and outdoor pavilion is the perfect place to hold your special event. Whether it is birthday parties, holiday parties, baby showers, or weddings the Springfield Elks can provide you with everything you need. Visit The Tiffany Room and Elks Pavilion page for more information.

New Beginnings – Reflections on the past:

On May 6, 2000 Springfield Elks celebrated the 100th anniversary of Lodge Number Sixty One at the Annual Banquet. As time passed in the 1900′ s the Annual Banquet became an evening to recognize the members of our Lodge who have earned Life Membership. In keeping with the tradition, thirty-six (36) new Life Members were honored that evening. Also the Annual Banquet marks the formal beginning of the new Lodge year. The officers of Lodge Number Sixty-one, along with their ladies, are introduced. For the 100th consecutive time Lodge #61 began a new year, this time in a new century, and as it had done in the past celebrated its new beginning by honoring its newest “oldest” members and new officers.

The members and officers of Springfield Lodge No. 61 thanked their many friends and supporters who have helped the lodge fulfill and meet many of its charitable and humanitarian goals. The work of our members is praiseworthy and the continued assistance of others is most important. Hopefully both the old and new relationships established between this Lodge and the greater Springfield community will continue to grow for another 100 years and longer as we begin a new century and move through the 2000s.

The Springfield Lodge of Elks #61 is proud to host special events at its banquet facility and outdoor pavilion. Contact us for more information. 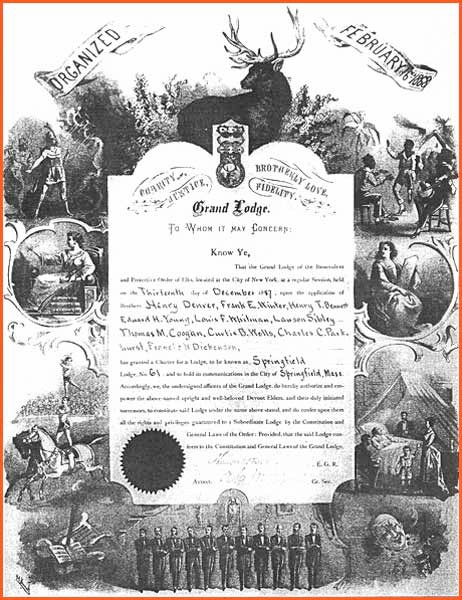 Reflections on the Past

March 28, 2000 in the 100th Anniversary of the rebirth of Springfield Lodge No. 61. Although Springfield was originally chartered on December 13, 1887 as Lodge #61, the Lodge lost its first charter when it was suspended in 1893. The facts surrounding the reasons for the suspension are unknown, but it is believed that a great many of its members went West as the country expanded and later many went off to fight in the Spanish-American War. For the next several years there was no Elks Lodge in Springfield. But in March 1900, with 32 members, the Springfield Elks was reborn as it was officially brought back into the fold by the Grand Lodge, this time as Lodge No. 561. On July 17, 1907 the Grand Board of Trustees of the B.P.O.E. voted to restore the cherished Number Sixty-One to Springfield. 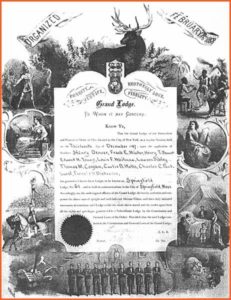 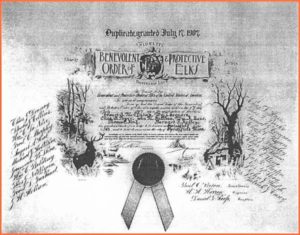 In examining the record books of the Lodge from the years 1900 through September 1903, the first registered member of Springfield in 1900 was Edward McClintock, a 27-year-old lawyer, who also was the first Exalted Ruler of the new Lodge at the beginning of the new century in 1900. The names of 200 individuals are inscribed in that book. They each answered the following seven questions: (1) What is your name?, (2) Where do you reside?, (3) What is your occupation?, (4) How old are you?, (5) Were you ever proposed, suspended or expelled from any Lodge of Elks?, (6) Are you in good health?, and (7) Do you believe in the existence of a Supreme Power? The names, signatures, and answers are attested by J.H. Lane, Lodge Secretary till April 1903, and then by J.B. Shea, new Lodge Secretary.

Among the occupations listed were lawyer, physician, electrician (Yes! There was electricity in 1900), hotel clerk, police officer, real estate agent, mailmen, salesman, accountant, etc. (All very familiar occupations of members today). Some of the more interesting, unique occupations listed were a ” traveling salesman,” a saloon keeper, whip manufacturer, two carriage and wagon makers, wire weavers, an actor, farmer, and cigar manufacturer. Most of the 200 came from Springfield, but several were from Holyoke, Chicopee, Westfield, and Northampton, others from South Deerfield, Hatfield, and Ware. During these years the Lodge was mainly a young man’s organization, the ages ranging from mid twenties in the thirties and forties. It didn’t appear to be a retirees’ club.

The current home of Lodge #61 at 440 Tiffany Street is the seventh residence for the Springfield Elks. The first in 1887 was rented space in Foot’s Block at State and Main Streets, and then space in Union Hall (the historic Union Trust Company building on Main Street). It was during this time that the Lodge lost its charter. Reborn in 1900 with a new charter in hand members met at the American Mechanics Hall in Springfield, and then two years later moved to quarters on Worthington Street near Stearns Square. Another move took place in 1904 when the Lodge used the old Springfield Club at Worthington and Chestnut Streets. In October 1909 Lodge #61 purchased and dedicated a 9 foot 2 inch bronze statue of an elk that was placed at the front of the Worthington Street Lodge. The same Elk statue stood outside of 440 Tiffany Street until 2009.

The Springfield Homestead (a local, weekly news journal) reported that each Elk member wore a white pink carnation with a tiny American flag in their coat lapels. Published reports of the evening stated it was a grand party with much singing, an address by the Mayor of the city, the Eleven O’clock Toast given, and then more toasts and singing followed.

The sixth move of the Lodge came in the 1910s when the Lodge acquired a lot at the corner of Myrtle and State Street (affectionately known for many years as “331 State Street”). In late 1914 a parade was held as Lodge members, delegates from other Lodges, and city officials marched from Chestnut and Worthington Street to lay the cornerstone for the new home at 331 State Street. The new home cost $50,000 to build, included a $3,500 pipe organ, a ” huge” Lodge Room, a very masculine Rathskeller in the cellar, a reading room, fireplaces, beautiful wainscoting, ornate woodwork, living rooms on the third floor, high vaulted ceilings, was generously furnished, and of course had a billiard room – a state of the art Lodge Home. The new State Street Home opened December 1915 and was formally dedicated, March 1, 1916. The building was designed to last for years and serve as the Home of Springfield Lodge No. 61 into the foreseeable Future.

In the Early 1960s a search began to find a new home for Lodge #61. In several ways the Lodge was outgrowing its home for the past 45 years at 331 State Street – a need for larger quarters, more parking, and other problems arose. With a good deal of trepidation and some reluctance the Lodge members did vote to find a new home and site. A search committee formed in 1961 and two years later reported favorably on a site on Tiffany Street in a residential area of Springfield. Architects were hired, plans and costs and financing submitted to the Grand Lodge for approval. Ground was broken January 13, 1965 for the new home and was finished November 12, 1965. The Springfield Sunday Republican newspaper article, dated November 14, 1965, reported a Golden Elkdom Era Passes – Lodge Moves to New Home.” Nine days later a class of 30 new members was initiated at the Tiffany site. A new era, new building, and new members became part of Springfield Lodge No. 61’s heritage and future.